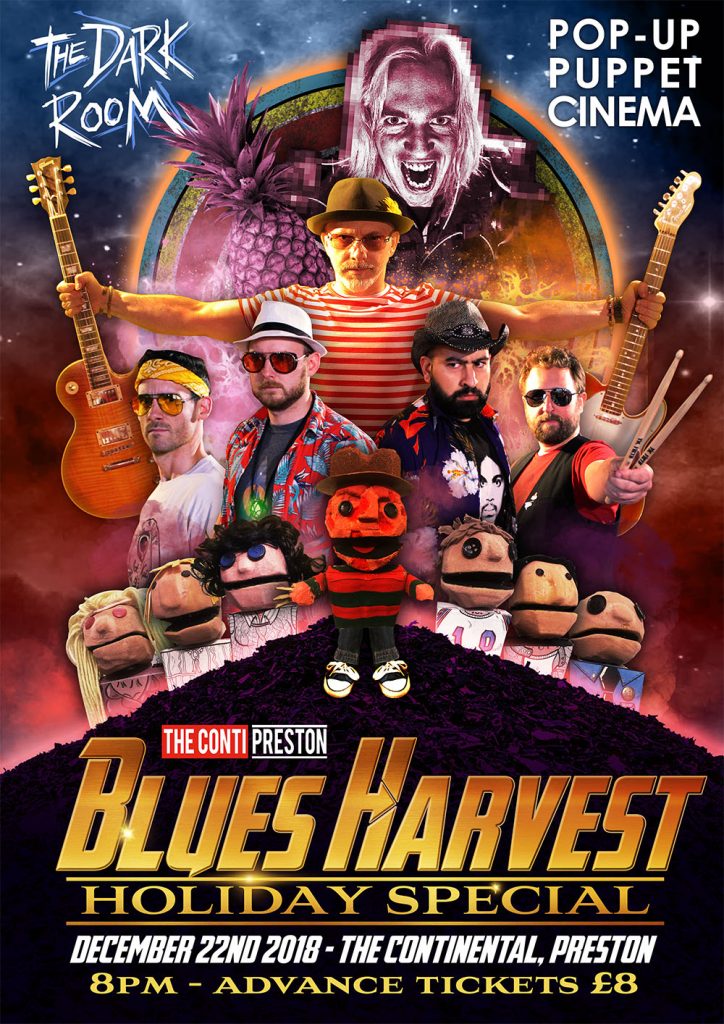 Cult comic book and Sci-Fi movie themed band BLUES HARVEST return to The Continental in Preston for their annual ‘Holiday Special’ (borrowing the event title from the ill-fated 1978 Star Wars TV special). This year POP-UP PUPPET CINEMA also return with their new show ‘A Nightmare on Elm Street’ alongside the acclaimed THE DARK ROOM from comedian John Robertson.

Blues Harvest have built up a cult following through their diverse song choices from the world of movies, TV and a few guilty pleasures along the way, performing songs featured in hit movies such as Guardians of the Galaxy, Back to the Future, Thor: Ragnarok and Ghostbusters, as well as their own Star Wars parodies featuring original arrangements of the iconic John Williams score.

Fronted by comic book writer and illustrator Nick Brokenshire (Star Wars Adventures / 2000AD / Amelia Cole), this band of space misfits has made a big impact in cantinas across the UK convention circuit. They have performed at various Star Wars and sci-fi events across the UK and in May 2018 they blasted into hyperspace with high profile shows at the National Space Centre and Disneyland Paris.

The world’s only live-action videogame, The Dark Room is a sadistic, interactive bit of stand-up that’s toured the planet. Get ready to die!

“NOT TO BE MISSED” – The Guardian

The best way to describe POP-UP PUPPET CINEMA is like Punch and Judy colliding with Hollywood. PPC condense classic films into live puppet shows, mocking the originals with plenty of warmth and admiration. This year the gang bring their outrageous new adaptation of ‘NIGHTMARE ON ELM STREET’.